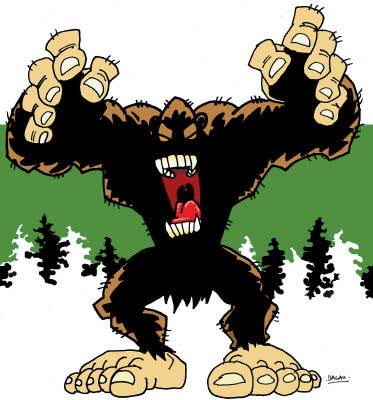 “Sweetheart, you have to stop saying that to the children. They don’t know you’re kidding.”

Once again, my wife and I were having a disagreement. I don’t understand it. I make a very rational request of my kids and she gets all upset. So what is the latest trial and trouble of Jeremiah? I simply told my kiddos that when I die, they’re to steal my body and throw it way back in the woods. Then in a couple of years, go “discover” it and say, “We found Bigfoot.”

{Subscribe to this blog and get email notifications when new things are posted. It’s easy to do in the subscribe section in the right sidebar. Thanks!}

Hey! I’m doing my part to live up to the “Bigfoot” thing. I have this homemade contraption. I tie it to my toes, lay on the floor, and swing the rope up to a pulley on the ceiling. Being attached to a five pound weight, it stretches my feet. I’m aiming for size 20’s. That should do it.

Anyways, my wife has this fear that my children will be riddled with guilt, when my “after-death” request isn’t honored. Now I ask you, am I expecting too much from my children? It’s a request that any red-blooded American whose afraid to be buried alive might make.

Let me stress, I am not afraid to die. I’m simply afraid of being mostly dead, but not quite there yet. What? You say I’m crazy? But, we’ve all heard the horror stories of people being buried alive. As a matter of fact, a friend of mine just told me of her deceased cousin up in Vermont. For some reason or other they had to exhume the body. Guess what? The inside of the casket was all clawed up. THEY”D BURIED HER ALIVE!!!! BWAHAHAHA!

At least I’m ready for death. There are those who avoid the subject like the plague. What do they think? They’ll live forever?

Hebrews 9:27 And as it is appointed for men to die once, but after this the judgment.  You can’t avoid the human body giving out. You could try freezing yourself, taking vitamins, exercising every day, repeating the Jedi Life chant (if you don’t know it, make one up), or singing the theme song to FAME (I’m Gonna Live Forever!). None of it helps. You are going to die!

The more important issue is, what happens then? Thankfully, God in His wonderful grace, makes it so we don’t have to be afraid.

John 3:16 For God so loved the world that He gave His only begotten Son, that whoever believes in Him should not perish but have everlasting life.

Some people think they’re prepared for the afterlife, because they’ve lived a good or moral life, gone to church, got baptized, took in a homeless guinea pig. None of these deal with the main issue. We are sinners. Sinners cannot stand in God’s presence.

Thankfully, God dealt with the issue. He gave His Son; the perfect sacrifice for our sins. According to John 3:16 we must believe in Him!

So, if you’re like me, then you’ve gotta get someone to steal your body and toss it in the woods. Or build a mausoleum. Or make sure they bury you with a cell phone that gets reeeeeeeally good reception for that emergency, “Help! Dig me up” call.

But remember, even if you can’t prepare for being mostly dead, you can be ready for when that final day happens, thanks to God’s love! Have you given thought to the afterlife? Don’t put it off.

4 Responses to Death and Bigfoot