The other day (November 2nd) my wife and I went to a Chinese restaurant. They were playing Christmas music. Shades of the movie, A Christmas Story! FA-RA-RA-RA-RA.

At Staples an employee was complaining about the store staying open all day Thanksgiving. ALL DAY ON THANKSGIVING!

For some reason stories like these anger people. They’ll grumble, “We’re forgetting Thanksgiving!” I’m sure you’ve heard this.

Well, I’ve put on my thinking cap and come up with some ideas on how to solve this national crisis.

1. Make Thanksgiving more Commercial. You know. Come up with some Thanksgiving Carols. I’m Dreaming of a Huge Drumstick or Fill my Plate With Tons of Stuffing (to be sung to the tune of Deck the Halls).

How about advertising Tony the Turkey who slides through doggy doors in the middle of the night and leaves giblets and turkey necks for good little boys and girls.

There’s one problem with this solution. The Christmas Syndicate wouldn’t allow it. 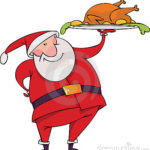 Thanksgiving would be muscling in on their territory. Next thing you know, there’d be major rumbles. Men dressed in Santa suits would be duking it out in the middle of the mall with others dolled up like turkeys. Vegas would be setting the odds as to who would win.

2. How about this. Demand People to Be Thankful! Make it a law! Wag a finger in people’s faces and growl, “Be thankful!”, like you were disciplining a dog who’d just done his duty on your kitchen floor.

Nope. That doesn’t work either. You can’t force people to be thankful. Frankly, most of them would exchange bragging for thanking. “Look what I’ve done.” or  “Look at the good year I’ve had.”

Here’s the solution I finally came up with. The REAL ONE!

Christians, Be Thankful. Plain and simple. Forget what everyone else is doing. How in the world you expect non-Christians to act like Christians is beyond me. You be thankful. If those around you are grumbly & grouchy, and are caught up in a society gone mad, you be a nonconformist. You be thankful to God for what He’s done for you. Stop worrying about the stores that are open or the fact that people don’t truly celebrate Thanksgiving. Don’t worry about what your neighbor is doing. What a radical idea. You, praise God for Who He is. Be an example to those around you.

YOU! YOU! You be thankful.

1 Thessalonians 5:18 In everything give thanks; for this is the will of God in Christ Jesus for you.

8 Responses to Solving the Thanksgiving Dilemma