Recently, I’ve been chastised for some of my Facebook posts. Knowing I want to publish books, a friend’s advice was meant to stop me from sounding too angry. I wouldn’t want to alienate future readers, now would I?

Creepers! It’s sooooooo difficult. There are so many things to react to. So many people who need to be straightened out. On top of that, anyone who doesn’t agree with the flavor of the day is labeled a hater! I could tell you a thing or two . . .

Whoops. I was doing it again, wasn’t I? 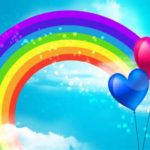 But, please let me explain why I do the things I do. It isn’t hate.

If it helps you to not think of me as being angry or bitter, think about rainbows and unicorns while reading this. Here’s some pictures to help. 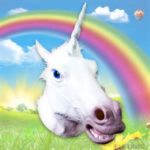 It’s like one evening the vast majority of Americans went to bed and something happened. An evil fairy clonked them all on the head or they fell out of bed, cracking that part of their brain that stores their God-memories. Now when making life decisions, it’s all- “What I want is what I want!” or “I have a right!” People don’t care what God says anymore. His opinion doesn’t seem to matter.

Oh no! Spiritual Amnesia has kicked in.

There’s stories of this happening in the Bible. One is about King Josiah. Some Temple remodeling going on, and they found these scrolls– the Word of God– which had been lost.

How in the world do you lose the Word of God? I don’t know, but somehow, they managed. Somehow, we’ve managed.

On reading the scrolls, the first thing King Josiah did was rip his clothing. This was a sign of repentance. He realized he and the nation had turned from the Lord. Spiritual Amnesia. After rediscovering God, King Josiah led a reformation.

How about you? In the issues cropping up in our society, how do you decide what is right and what is wrong? Do you seek God’s way or your own?

We need to get over our spiritual amnesia. There is a God! He is not make believe like the Easter Bunny; not the product of man’s mind that we can change whenever we want.

He is God, the creator of all that is. God, whose Son died for your sins on the Cross. God who is being very patient with us, but that patience will not last forever.

Like amnesia victims, hopefully, one day people who’ve forgotten God will wake up and say, “Hold on! I remember!”

Meanwhile, those who do not suffer from this malady must stand for God’s way even if they are called haters or some other foolish term.

Let me tell you, I pray for friends and family members who are living outside the will of the Lord, who have spiritual amnesia. It’s not hate. It is a deep loving concern.

I hope the unicorn and rainbow helped. But I suggest the following verses may help more than silly pictures.

2 Timothy 3:12-15 Yes, and all who desire to live godly in Christ Jesus will suffer persecution. But evil men and impostors will grow worse and worse, deceiving and being deceived. But you must continue in the things which you have learned and been assured of, knowing from whom you have learned them, and that from childhood you have known the Holy Scriptures, which are able to make you wise for salvation through faith which is in Christ Jesus.