It’s All About the Potpourri 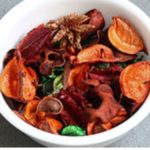 The other day while I was in a local coffee shop, my friend Henry came running up to me, all excited. “I figured it out!”
“What?” I asked.
He slid into the seat across from me, sipping on some frilly coffee and whipped cream concoction. I personally don’t touch the stuff and can’t tell a frappe from a pile of guacamole.
Wide-eyed, he exclaimed, “All this bathroom fuss.”
“Bathroom fuss?”
“You know! Who uses girls’ and who uses guys’ room.”
I groaned. Frankly, if we went back to using outhouses all of this would be dealt with.
He smiled and sat back. “I wondered why in the world would a guy want to use the ladies’ room?’ The only way to determine the truth was to check it out.”
“Er . . . check it out?”
He nodded. “The ladies’ room. I tried it.”
“What?”
“At the —–”
[For legal reasons and fear of getting my friend in trouble, the store’s name has been omitted. Kind of like, “The names have been changed to protect. . .”]
“You went in the lady’s room at —-?”
“Sure! Hey, I’m not a ‘perv’ or anything. I waited until it was empty, then I crept in.”
He had my attention. “What did you find?”
Henry leaned forward and spoke, almost awestruck. “It’s a whole new world . . . They got potpourri!”
“Potpourri?”
“Right there by the sink. And guess what? The floor around the toilet was clean.”
[For those of the female persuasion, this is a big deal. Some men are . . . target-challenged. And, YES!, it is disgusting.]
I dismissed him with a shake of my head. “I don’t think one bathroom with potpourri –”
“No wait! I did my research.” He pulled out a small notebook and flipped though the pages. “I checked out fifteen bathrooms in all.”
My mouth dropped open.
“I found ten with potpourri, twelve with fancy air freshener, six with actual flowers, and . . . get this!” – he paused for effect. “Four of them had couches and magazines!”
This last revelation actually took me by surprise. “What?”
“Mind you, the magazines were out of date, but at least they had them. We don’t have those things in the guys’ room. The closest is newspaper pages over the urinals.”
“Why do they need couches?”
He shrugged. “For meetings, I guess.”
“Meetings? What kind of meetings?”
“Beats me. I tell you what, I can see why some guys want to use the ladies’ room.”
“Sure, but what about the ladies that want to use the mens’ room.”
He didn’t even hesitate. It was as if he’d already thought about this. “They’re stupid!”
“Henry!”
“They gotta be. Have they ever seen the inside of Guys’ rooms? They got no potpourri. No couches!”
I had to admit he was right.
“So I’ve come to a decision. I’m gonna start using the ladies’ room.”
“You can’t do that.”
“Why not? I’ll become trans-whatever it is.”
“I don’t think it’s that easy.”
“Sure it it. Look at that white lady who told everyone she’s an African-American. Or that other one who says she’s Native American. People fall for that stuff all the time.”
“But you’re not talking the same thing.”
He ignored me and waved a finger in the air. “I got it! I could be trans-alien! You know, say that on the inside I feel like I’m from Mars.” 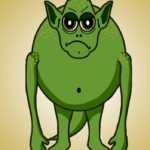 Hmmm. This idea intrigued me. “You certainly act like you’re from another planet.”
“Thank you!” His face brightened. “Do you think I could get my own private alien bathroom.”
“I don’t know if–”
“I’d only accept it if it had potpourri.” With a sly smile, he gave a nod. “All the bathrooms on Mars have potpourri.”
“Henry, my friend. The way things are today, I’m sure some people will protest on your behalf . . . Some politicians will fight for your rights to have a trans-alien bathroom.”
Henry straightened up. He had a far away look on his face, a confident smile on his lips. “Trans-alien. Yes! Potpourri here I come.”