If it looks like a duck, and quacks like a duck . . . It may not be a duck.
My wife and I were driving down a back road in New Hampshire, enjoying the scenery. That’s when we saw it–A swan swimming in a small pond. 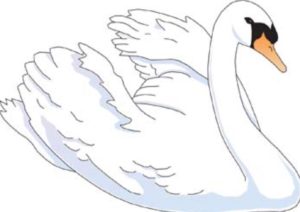 “Get a picture, get a picture,” I hollered as I pulled to the curb. Sure enough, the graceful, long-necked bird floated on the water as if it didn’t have a care in the world.
So majestic. So beautiful.
Bushes and trees hampered our line of sight so I moved the car forward and back, angling for the best shots, shouting orders to my wife as she clicked pictures with her phone’s camera.
When all was said and done, we drove away, feeling almost reverent that we’d been privy to such a beautiful scene.
About four days later we ventured down the same road. What were the chances we’d spot our swan again? I didn’t think too good, but low and behold, there it was! What good fortune! Almost a God given miracle!
Three days later we drove by again . . . There it was . . . Still the same spot. As a matter of fact . . . it’s head and neck were angled the same exact way.
Hmmm . . . Something is fishy here.
Uh-huh. My powers of observation are so keen, it only took me three sightings to figure this out. Columbo’s got nothing on me.
Well a couple of weeks later (with three more drive-bys) I came to the conclusion that it was a plastic swan. Or to make myself feel like less of a dolt, let’s call it a Simulated Likeness of an Actual Swan. Hey, the more fancy the term the more money you can charge for the product.
I’d been duped. No. It was probably my wife who’d been duped. Yes! That’s it. Now that I look back, I originally pulled over at her bequest. Kind of like how Eve fooled Adam.
I’m sticking with that story!
So, my friends, beware of plastic swans, or even Simulated Likeness of Actual Swans.
It’s a good lesson in many avenues of life. Even in the spiritual. In Matthew 7:15, the Bible says, “Beware of false prophets, who come to you in sheep’s clothing, but inwardly they are ravenous wolves.”
This is a problem the church has had since its inception–Plastic Swans, pretending to be the real thing. Or to be more precise, false prophets pretending to be the real thing, leading people astray.
That’s why John gave some sound advice.
1 John 4:1 “Beloved, do not believe every spirit, but test the spirits, whether they are of God; because many false prophets have gone out into the world.”
Don’t fall into the trap of pulling to the side of the road and snapping pictures of fakes. Test others’ beliefs by the divine Word of God.