Part Two- How to Become a World Famous Author 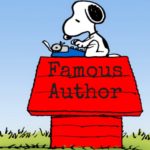 will follow the crowd?” Several alpha mice (the cool ones) were fed a diet of mud, and taught to exclaim with their Mickey-like voices, “Wow, this is good!” By the end of the week, all the other mice were ignoring their regular food and munching on mud pies, squealing, “We’re cool! We’re cool!”
Lesson learned – People will follow the crowd.
That leads us to our next sure fire way to become a world famous author.
The Papparazzi Principle.
It’s simple. Get a bunch of your friends to stage mock events. When people see the crowd, they’ll join in.
For example, let’s use the venue of a bookstore. Your friends enter the store in a casual manner, not all at once. We don’t want the manager to have a heart attack. “Oh look! Thirty customers! My dying business is saved.”
No, they meander in.
At the assigned time, you make your entrance and your friends go into action.
“Hey! Isn’t that the world famous author, (Insert your name here)?”
“By George, I think it is!”
“His book is better than pepperoni pizza!”
They mob you, demanding autographs. Just by chance (wink, wink), you happen to have a few copies of your book with you. If your friends are fast thinkers, they could set up a table, complete with a life size cutout of you. An impromptu book signing! Others will see it and ask, “What’s going on?” Unsuspecting people, like the mice with the mud pies, will flock to your table.
Who knows where this will lead. As a matter of fact, my friend Larry found true love using this method.
His book, Making the Right Connections, was a big hit with the women. For some reason, they all assumed it was about romance and dating.
What was it really about? Plumbing. Chapters entitled, “Don’t Flush Before Your Time” and “Going with the Flow” should have been dead giveaways. Oh well. Before he knew it, Larry married one of his groupies, a beautiful model. They were together for five years before she realized he was a plumber!
Wanting to make her happy, Larry changed the course of his life. He became one of the biggest relationship gurus on the West coast. Who’d a thought it? All because he followed the Papparazzi principle.

If you’d like to meet authors who might or might not have used the “Papparazzi Principle”, join us on November 1st for the “Meet & Greet Local Christian Authors”. To find out more, go tohttp://www.EventBrite.com and enter “Meet & Greet Local Christian Authors” in the SEARCH box. If you prefer to speak with someone, call Clarice James 603-578-1860 or email her at meetgreetchristianauthors@gmail.com.

And remember, if you’re there Saturday, crowd around my table, shouting, “Isn’t that the world famous author, (insert my name). Hey. It couldn’t hurt.